One of the highlights of my London trip was having an awesome opportunity to meet a blogger friend that has been friends with me for more or less 7 years. Due to our diary-like blogs, we felt that we had known each other in some ways and when we met, it did feel like meeting an old friend and the bonus part was that we found out many more things we had in common. :-D We are both not good at finding directions (Nikki doesn't actually live in London), so we were glad to have Google Maps on our mobiles he he he he...We had fun being tourists in London for the day!

Prior to our meeting, we had decided roughly on the places we'd visit. First breakfast, then off to roam around the city and then lunch at Chinatown. Planning the meeting was fun, but experiencing the day itself was the most fun of all! :-D Here is what Nikki wrote about our meeting and I'll just have some bits to add here.

We chose Balthazar at Covent Garden for breakfast. We had browsed through the online menu prior to our meeting, but still that day we had a little trouble to choose because we wanted to try so many things LOL!!! We ended up choosing the same dish: Scrambled Eggs and Cornish Crab. It was yummy! For drinks, we had water and coffee latte to wake us up a little.

Here's the beautiful Nikki at Balthazar. 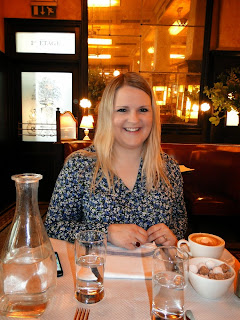 And a pic of us together. 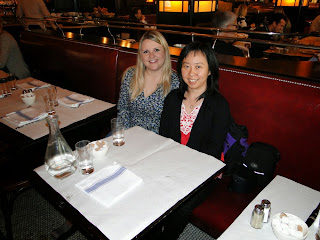 And a pic of our food: 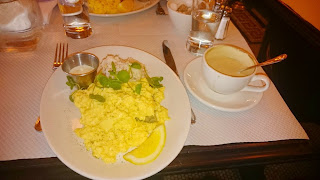 And because I'm a crazy Asian, I just had to take a pic of myself in the toilet HAHAHAHAHAHAHAHHHH...Ahem...actually, someone in Tripadvisor has advised us to go check out the toilet in Balthazar. I'm serious. So we did LOL!!! 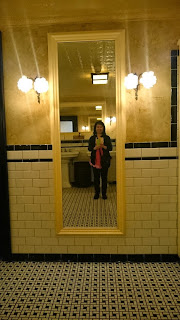 Then we moved on to Covent Garden market, but it was still closed (we were a bit early), so we roamed around the area while waiting for the market to open.
Here are some photos: 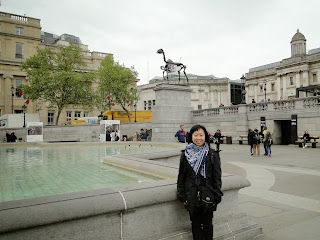 There's an explanation for the weird-looking horse statue behind me. 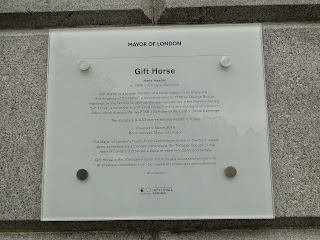 This is the huge lion statue in the same location: 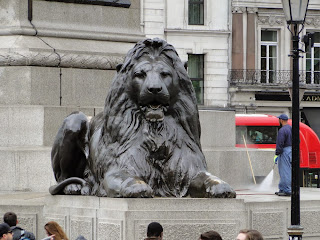 While walking around the place, we also saw this gorgeous bakery and as we both loved cakes, we decided we'd go back to this bakery later on.

This was the window display that stopped us on our tracks and made us drool. 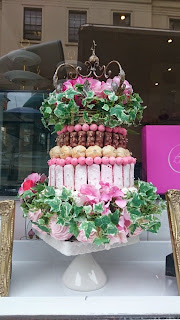 The thing was that we didn't write down the address or remember the bakery name or take a photo of it (this photo was taken after we had cakes there), so we had a bit of a fun time trying to find it again after we visited the Covent Garden market HAHAHAHAHAHAHAH...but we did find it again eventually. Here's the site for the bakery: BB Bakery. 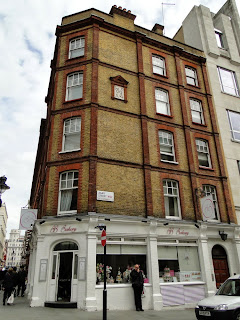 Here are two pics of Covent Garden market. I found a T-shirt for myself and a belt for R2 (I was very tempted to buy other lovely stuff too from this market, but I had a budget to follow HA HA...). We also looked around at some shops there on the ground floor and saw a bit of a group of musicians performing their music. Another day when I went there again, there was an opera singer belting out her song (incredible strong lungs!). 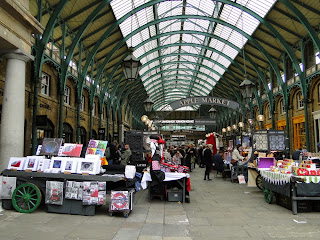 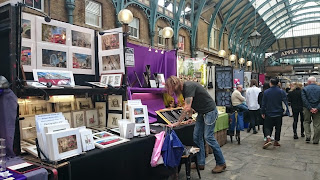 From there we went back to the lovely bakery and had different cakes. If I remember correctly, a package of tea and a cake cost £8.50. Again we had a hard time trying to decide which cake to choose as they all looked so gorgeous! I told Nikki it would be more fun to go there with a group of friends because then we could each choose a different type of cake/muffin and we could take turns trying different cakes/muffins he he...

Here are some photos of us and our cakes. My teapot is so pretty, isn't it? 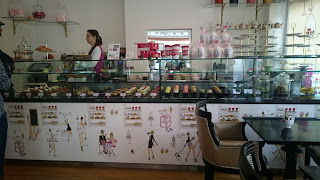 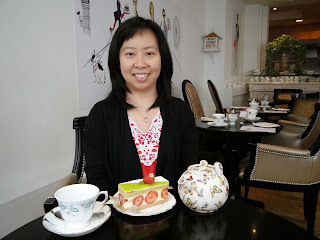 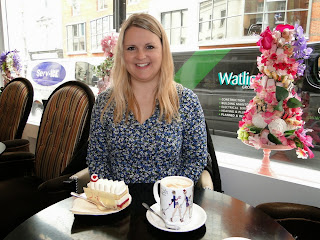 The whole place was so pretty that even the toilet was pretty! Yep, I must be weird because I keep taking photos of toilets ha ha ha ha... 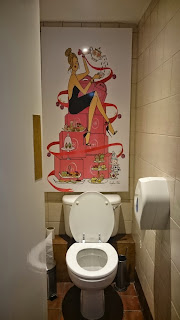 After we filled our bellies with cakes, we continued our way towards Chinatown. On the way there we also saw some street performers. The guy below was in chains (the two young guys were helping him out by tying up the chains around his body) and then he had to escape within a certain amount of time. It looked painful, but of course he managed to escape he he... 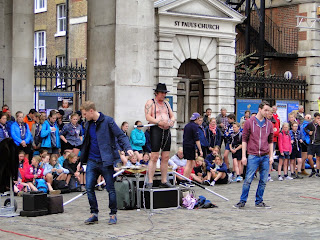 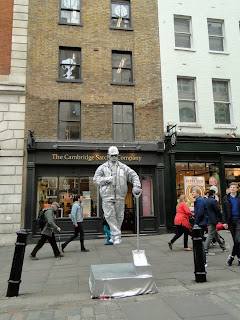 And this guy in uniform actually posed for me when I took out my mobile and prepared to take a photo ha ha ha...Note: notice the sun? Yep, it came out for a little bit that day he he... 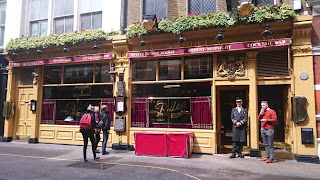 And we finally arrived at Chinatown! YAAAAAAAAAYYY!!!!! Here's the beginning of one end of Chinatown. Yep, so many people trying to take photos of themselves with the Chinatown gate. I bought some food and snacks to take home from one store that sold Asian food stuff and I promised myself I'd get back to Chinatown for more before I had to fly back to Finland he he... 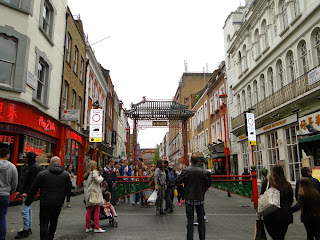 It started raining when we were in Chinatown, but we were way too full to have a proper lunch, so we decided to rest our legs and just had some light dim sum. It was great to have lots of places to choose from and the one we chose was kinda quiet, so we could chit-chat and relax there.

Purple dim sum, anyone? Unfortunately for some reason they've put on some purplish light on top of the tables, so the dim sum looks like this, but it was just the perfect portion for the both of us. :-D 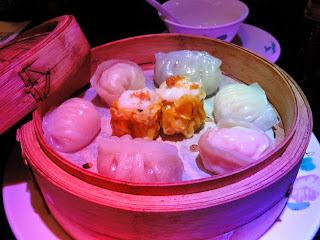 After dim sum we headed to the tube to go to our separate ways. It was certainly a day to remember! I have very fond memories of this meeting and I hope it's not going to be our last. Either way, though, I'm thankful that blogging brought us together. I'm looking forward to meeting Nikki again, wherever it may be. :-D Thanks SO MUCH for taking time to meet me in London, Nikki!!!!!
Posted by Amel at 14:49