1. I found out that -26'C in DRY Sodankylä feels BETTER than -13'C in MORE MOIST Helsinki (esp. when it's windy, too). Why? Because in Helsinki it felt that the cold air just seeped inside my jackets straight into my bones. Even R2 said it was cold!!! So I'd rather have cold weather in Sodankylä 'coz at least the coldness stays "outside" your body provided that you have enough layers of clothing.

1st pic: There are some Christmas lights left in Helsinki. 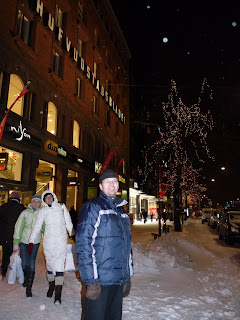 3. LOVE the fact that there are so many bookstores in Helsinki with an incredible collection of books (including English books) HA HA HA HA HA...whereas in Sodankylä there's only ONE small bookstore. Ahem. 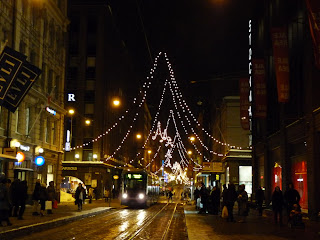 5. Went to two museums in Helsinki (Kiasma Art Museum and Tennispalatsi Museum). In Kiasma they displayed contemporary art and we felt that many of them were way too contemporary for us ha ha ha...but we were both SO impressed with one particular art form.

This art form is located in one corner of the huge display room. The corner is VERY dark and it's an L-shaped. So from outside, you can't see anything but a plaque stating the title of the art form, the artist, etc. Anyway, the title of the art is: Foam. Then you have to walk inside the L-shaped corner (which is REALLY dark - I had such an ominous feeling when I entered) and then about 2 metres ahead of you there's a huge screen. When I entered the site, the screen showed a round-like figure (which is actually a red balloon) and some foam (like when you've spread some foam to shave a guy) and then you notice someone starting to shave that round-like figure, but before you realize what it's about, the balloon pops out (obviously) with a LOUD bang! I was SO shocked ha ha ha ha ha...so I told R2 about it and told him to go see it. And he was also SHOCKED by the loud bang HI HI HI HI HI...

We both agreed that it was the best display in the whole museum, though we also like two others. The other one is a gorgeous picture which I can't describe (believe me, it's just GORGEOUS!) and the other one is a replica of a WAVE. It's SUPER cool! :-D

In Tennispalatsi Museum there are two displays, but we went only to one of them. It displayed mostly Russian paintings. I LOVE many of them, though I found that there were too many melancholic faces portrayed there. In some pics they look SO real (like photos instead of paintings) so that we had to get as close as a few centimetres away to find out whether they were paintings or photos HA HA HA HA HA HA...We just had to make sure!!! ;-D

3rd pic: Light display which changes colour every errr...few minutes or so? 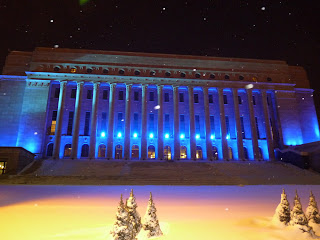 6. We also went to watch Avatar 3D movie in Helsinki, but alas...something horrible happened. My eyes couldn't take them. The special effect of the movie was such (hard to explain, but those who've seen it must understand what I'm talking about) that 10 minutes into the movie, I started feeling dizzy and SUPER nauseous already! I had to shut my eyes for almost the rest of the movie (which was about 2,5 hours long, imagine that!) so that I wouldn't puke. Note: Even R2 said that in some scenes he felt a bit dizzy 'coz of the way the movie was made.

I wanted to go to the toilet to puke, but we were sitting in the middle of the row and I didn't want to bother other people. So the only trick I could do was just shut my eyes - the nausea subsided only after 45 minutes of doing this, can you imagine that? It felt like a HORRIBLE case of sea-sickness. Ugh!!!

I wonder if anybody has experienced something like this? Or am I just the weird one out?
7. What did I buy in Helsinki? One Finnish novel on a discount (only €2), one Finnish Exercise book, and some chocolate he he he he he...

4th pic: The Indian food we had at Tandoor Resto in Salomonkatu (near the Tennispalatsi Cinema). We had lunch buffet for €8.50 each - the red meat is chicken and that's the BEST thing ever! ;-D 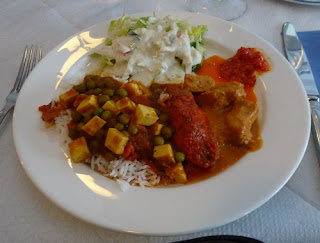 OK, I'll blog-hop either later today or the day after today 'coz I'll be busy tomorrow. My new passport is done and the Indo Embassy employee even sent it to our hotel the same day, can you believe it? I'm REALLY impressed and thankful for their help! ;-D But tomorrow I have to go to the police station to move my residence permit to the new passport and I need to cook and clean up the apartment, as well.
Posted by Amel at 14:26