As you probably know, my Indo trip was the first time I had ever been separated for a long time with hubby after I moved to Finland on March 2007. A part of me didn't want to go, yet another part of me was SO excited to go back to Indo.

The weird thing was that, during my trip back and forth, SLEEPYHEAD ME couldn't sleep on the planes. That's something I wasn't expecting. Even last year when R2 and I went to Indo, I could still sleep on the planes, but this time I couldn't. Dunno why. I was SO frustrated 'coz my eyes were SO tired and heavy and I could feel something pounding behind my eyes after a long while. I threw up twice on the way to Indo. Good thing was that I didn't get sick on the way back - I think it had something to do with the fact that I spent a night at Marriott Hotel nearby Hong Kong airport so that I got at least a 7-hour decent sleep despite the long journey.

I had a terrible jet lag when I arrived in Indo (had a HARD time sleeping for a few days at least - this didn't happen last year) and R2 also had trouble sleeping (he woke up almost every night and had a hard time going back to sleep). So my heart was torn in two - 'coz R2 suffered as well.

Thankfully my brother has bought a laptop and subscribed to a better inet connection, so R2 and I could chat a few times a week and we could also use our webcams to see each other. The bad thing was that my bro's inet connection wasn't strong enough to stream two webcams at the same time (Yahoo Messenger kept on shutting itself down), so we had to take turns in seeing each other ha ha ha ha...but all in all it helped a lot. R2 also called me using Skype a few times. THANK GOD for technology!!!

The first week in Bandung was TERRIBLY hot (around 30-32'C), but then it started raining almost daily, so the temperature got down. One morning I found out that it was only 22.5'C he he he...nicely cool!!! Mind you that when I left Finland, it was -5'C.

After being in Bandung for about 2.5 weeks, I felt like wanting to go back to Finland again. This time I didn't have too many things to do, so it felt like I was doing nothing much except eat, sleep, talk with my family and friends, go to the mall, etc. I did enjoy my time there, but I THINK the longer I stay in Sodankylä, the more I'll feel that Bandung is TOO chaotic, crowded, and noisy.

I have to admit that it feels like my elbow room is WAY too restricted (I almost felt like wanting to scream to the people there: "Move away from me!" - crazy, eh?). I feel that there are too many people, too many vehicles, too many street sellers (some of them put their stalls almost in the middle of the street!), too many wild drivers in Bandung. It's pretty logical why I feel this way...let's look at this info from Wikipedia:

Anyway, I did eat a lot of different kinds of food he he he...to make my posts not too long, let me just share a pic of a tropical fruit called "manggis" in Indo (for some reason I don't remember the English name) that I managed to find in Bandung that I can never find here in Sodankylä: 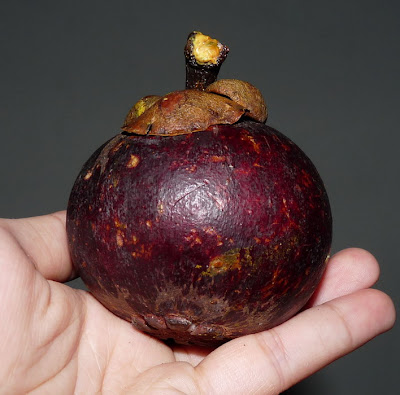 Notice the 7 "petals" at the bottom of the fruit...they represent the number of "pieces" of manggis there are inside. When I was a kid, whenever manggis was in season, we used to play this guessing game...we'd cover up the bottom part and ask our friend to guess how many manggis pieces there were inside he he he... 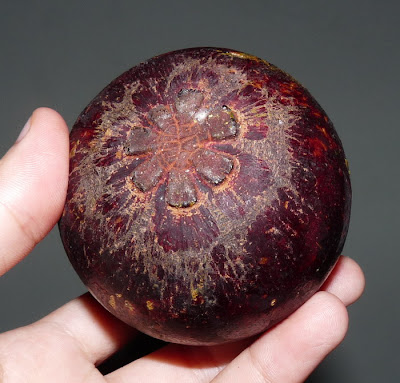 The inside of the fruit...you can eat the white parts (there are seeds inside the big ones, but you can swallow them too). See? There are exactly 7 pieces he he...If I remember correctly, there are usually around 4-7 pieces (no more, no less). 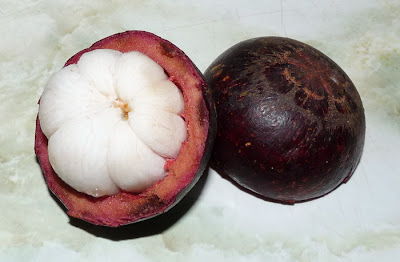 I've taken plenty of videos of Ken, as well, so I'll share them later along with other stories and pics. I still have plenty of things to do now...such as blog-hop ha ha ha...Btw, THANK YOU for all the birthday wishes! :-))) My birthday was spent in my in-laws' where we had moose and potatoes and also a chocolate cake he he he he...;-D (And I don't feel a year older WA HA HA HA HA HA...)
Posted by Amel at 08:15