Yep, I haven't had time to write about my Indo Trip. I've been busy cooking, baking, and doing other things he he he...

Anyway, Ken in real life is just like what my Mom described him. He's SO active. When I arrived there in the beginning of November, he could walk a few steps without help already, but 'coz he was such in a rush (he always wants to walk SO fast), he still grabbed our fingers whenever he wanted to go around the house. However, about a week before I flew back to Finland, he started walking on his own.

First he started walking with his hands high up (to keep his balance), then every passing day he lowered his hands bit by bit until he could walk pretty normally, though he was still making our hearts skip a beat whenever he tried turning around and round and round after walking (thus making him lose his balance). He also still didn't know how to pace himself yet - his legs went that way whereas his eyes looked the other way...making us have to be WARY of things that might be in his way that could harm him.

So as you can imagine, it's still SO tiring to take care of him 'coz of this phase. I have to admit that I'm amazed at the rate of how a little child learns, though. He can't talk well yet, but he understands so much already. For example if people tell him, "Where's Auntie Amel?" he'd turn to me. He started doing that the day I came to Bandung - it means he recognized me though he had never seen me in real life (but my family had always been pointing to my photo and telling him who I was). And whenever I ask him something (for example "Where's the bear?") he'd point to the right object. Amazing!!! Amazing how the brain thinks...it makes me a bit envious, too...wish I could absorb Finnish THAT fast HA HA HA HA HA HA...

Anyway, it was HARD to take good pics of Ken 'coz he wanted to grab my camera and see himself there, so let me just share the link to Ken's videos. Note that the first 5 videos in the album is my friend's son's videos. I've written down the titles of the videos there.

Here are a couple of pics of Ken:

1st pic: He just LOVES umbrellas for some reason. He'd look up at the opened umbrella and just be amazed at it. Funny thing is that my cousin's and friend's sons were also like that at that age. 2nd pic: We were at a a mall and Ken got a balloon. In this pic he kept on waving the balloon around so it was hard to take a good pic of him with us hi hi... 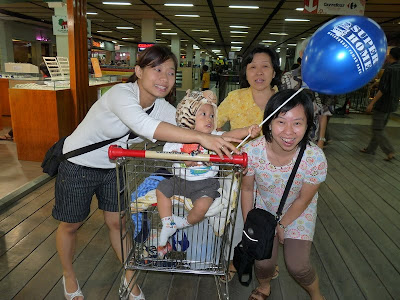 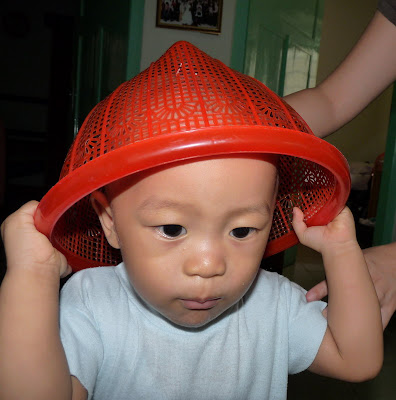 4th pic: He pretended to cry 'coz he wanted to grab the camera and my bro wouldn't let him hi hi hi... 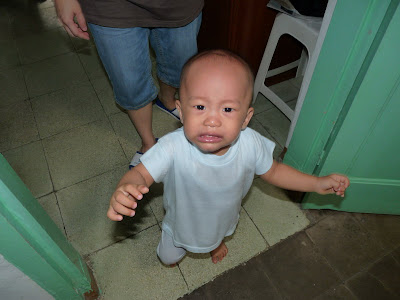 I'm TOTALLY amazed that such a small child (12/13-month-old child) can PRETEND to cry just to get what he wants. Geez...Once he gets what he wants, he'd drop the act right away and smile.

Ken LOVES playing with us, too, especially hide-and-seek. He'd run to the back of his bedroom door and stand still for a minute or two until one of us tries to find him. He also loves another game of hide-and-seek where he'd jump into the arms of me or his helper or his Mom and then he'd want to be chased by somebody else. For example he's in his Mom's arms and I have to chase him from afar. He'd giggle and laugh and jumps around in his Mom's arms if I do that. And he'd want to repeat the fun over and over and over again he he he...so I have to hide first in the other room(s) and then shout out, "Where's Ken? Where's Ken?" and he'd start jumping in glee right away in his Mom's arms even before I start running towards him to catch him he he he...

One time he wanted to "switch places", so he jumped from the bed to my arms 'coz he wanted his Mom to chase him he he he...I had to hold him really tightly - otherwise he might fall down 'coz he was jumping around in my arms with all his might he he he...it was really fun to be childlike when a kid is around!!! :-D
Posted by Amel at 10:32